Playing with my Peeps!

After cleaning up the Easter Flower arrangements which included sets of Peeps for a touch of whimsy as seen here and here, the Peeps were abundant and out of control: 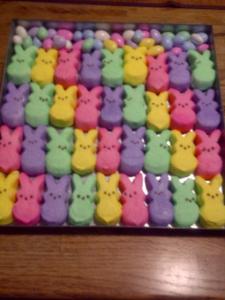 First they formed their own Rainbow Coalition!

Then they tried this:

And a Sports Challenge:

A few went their own way and dueled to the death:

Toothpicks were the weapon of choice!

A Pile of Peeps!

Guess who was bored today?  I was actually locked in my Apartment, the door latch broke and I couldn’t open the door to go out.  The super came and it took him over an hour to get into my apartment, finally gave up on the door and came up the fire escape and through a window!  He worked on the inside for awhile and returned to the hall and finally “broke in”.  He’s currently out buying a new lock assembly to install all new hardware! I hope!

And while no peeps were hurt in the flower arranging we had many causalities during the dismantling, and yes, I resisted eating any!  Especially since they were staler than when purchased!

4 Responses to Playing with my Peeps!

Home is Where the Boat Is

A Dad and His View from the Kitchen

(The life of a Louisiana Expat in the cold, cold North)

From A Chef's Kitchen

Fast, flavor-packed recipes from the Queen of Pressure Cooking

Little treasures discovered while exploring the back roads of life

The latest news on WordPress.com and the WordPress community.