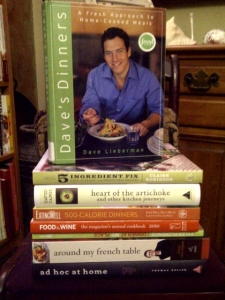 Cookbooks are here to stay!

This has been quietly brewing for a time now, how are the printing industries reshaping their businesses?   A world without books is a strange world, at least to me.  I have a rather large collection of cookbooks and until recently had around a hundred fiction and non-fiction hardback books.  During our bedroom redecoration we purged them by donating them to our local library.  We re-purposed the shelves where they were stored!  Thankfully, no cookbooks were stored there!

So after reading this entry “Why Cookbooks Are Here To Stay” from a fellow blogger that I follow, The Amateur Gourmet aka Adam Roberts, I really started thinking about how I use my own 400 plus collection. The variety is staggering!

My books contain old classics like my Mother’s Women’s Home Companion circa 1945, gifted to her by my Father’s Mother as a Christmas Gift in 1946.  It’s worse for the wear and I currently have it held together with masking tape.  A few years ago I searched for one on EBAY and found one from 1947, the year of my birth!  Turns out that it’s a reprinting of the 1945 version!  So I have one in good condition and Mom’s which is falling apart.  And both make me happy.  I remember reading this book when I was a teenager learning how to set a proper table, both casual and formal!

It was published by P. F. Collier & Son Corporation, New York.  And has an introduction by Dorothy Kirk, Food Editor , Woman’s Home Companion a magazine published between 1873 and 1957.  More detailed info here.

In her introduction, Dorothy Kirk , states that it’s more than a Cook Book it’s “a handy  kitchen encyclopedia.”   She further advises to “let it be your friend.”   So I did, the first chapter is titled Useful Information where I learned how to measure properly, versus my Mother’s lesson which was how to cup your hand and pour in salt, sugar etc.  At 13 my hands were appreciatively smaller than hers, her advice: improvise! 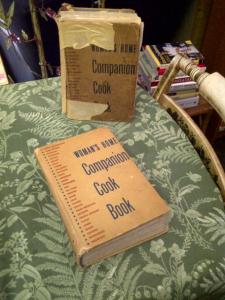 Reading this cookbook gave me an understanding of how to convert written words into an edible dish that would feed my sisters and parents.  It gave me the confidence to locate other recipes from more current sources and to create my first “dinner party”, a surprise family dinner for my Mother’s birthday. After starting with a Shrimp Cocktail, I made a mashed potato souffle to accompany a baked canned ham with champagne sauce!  (Hey it was the ’60’s! I don’t remember the rest of the menu except for the cake which I baked and frosted and hid in the cabinet over the fridge in our un-air-conditioned Florida kitchen in August!  Can you say soggy cake?

My other classics are not as old and are classics to me because they were my classics, books I

have cooked from over the years for my family and friends.   They include the red and white checkered loose leafed Better Homes and Gardens Cookbook, a wedding present.  Other titles from the 70’s The New Doubleday Cookbook; Fannie Farmer; The New York Times from 1961 and the updated edition from 1990!  And of course the treasured Mastering the Art of French Cooking Volumes I and II!  Now there’s new classic reference style tomes on the shelf like: The Essential New York Times Cookbook; Gourmet Today; Bon Appetit Fast Fresh; A New Way to Cook; Cooking Light’s Way to Cook; The Silver Spoon and The Dean & Deluca Cookbook.

Over the years great additions were The Silver Palate books (3); a variety of Martha Stewart’s early works including Entertaining which along with Bon Appetit’s Too Busy To Cook? launched our catering business in the late 80’s!

The collection of Authors is just as impressive, there are Famous Restaurant Chefs, TV Chefs, Cookbook Authors that have stayed off TV, Radio Personalities, Celebrity Chefs.  Too many to list them all but a few are: James Beard, Julia Child, Craig Claiborne, Ina Garten, Giada DiLaurentis, Mario Batali, John Besh.

There are collections of recipes put together by Food Magazines, like Gourmet, Bon Appetit, Food & Wine, Cooking Light, Cook’s Illustrated, Fine Cooking and even a few series by Time/Life.  Collections from Restaurants, Culinary Schools, TV Shows,

Books on theory and science of cooking; books on diets, so many diets; books on garnishing; books about becoming a chef, stalking a chef and even exposes of the restaurant world!

I collect them and either read them like novels or scan thru them looking for inspiration, the kind I got from reading my Mother’s cookbook all those years ago.  I don’t think electronic versions can provide the same experience.  I rarely take a book into the kitchen anymore, because I put the recipes into the Mastercook software on my computer and print them out, as needed, so I am only dealing with a sheet or two of paper while cooking and not worrying about spilling and staining my books!  So, sure, an app or two or a recipe on a pad or tablet would be convenient also, I, for one will not be shunning my collection of cookbooks! 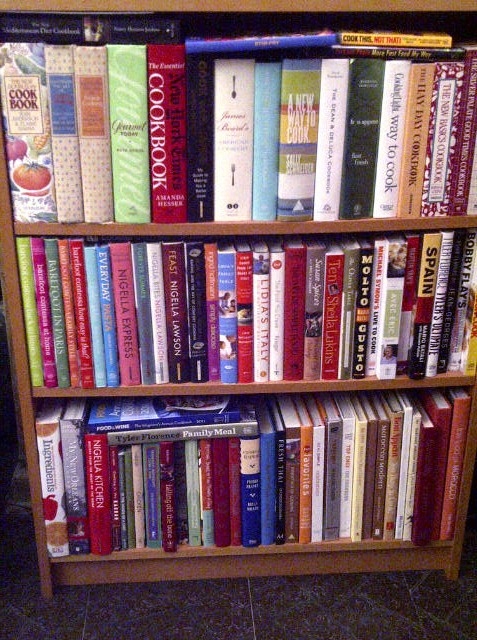 One of the many filled bookcases!

And as a Personal Chef I continuously add to the collection with the latest and greatest!  Or as some say with reckless abandon! Hopefully, these will be cherished by family members in the future, at least half as much as I cherish them now!

6 Responses to The Big Cookbook Debate: Traditional or Electronic?

Home is Where the Boat Is

A Dad and His View from the Kitchen

(The life of a Louisiana Expat in the cold, cold North)

From A Chef's Kitchen

Fast, flavor-packed recipes from the Queen of Pressure Cooking

Little treasures discovered while exploring the back roads of life

The latest news on WordPress.com and the WordPress community.